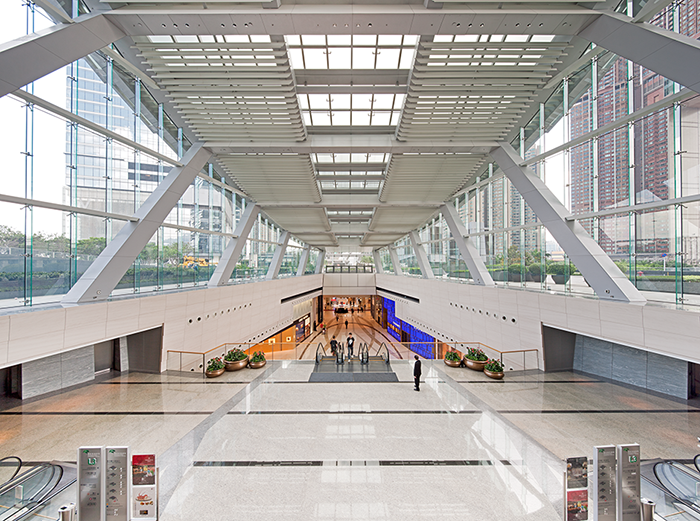 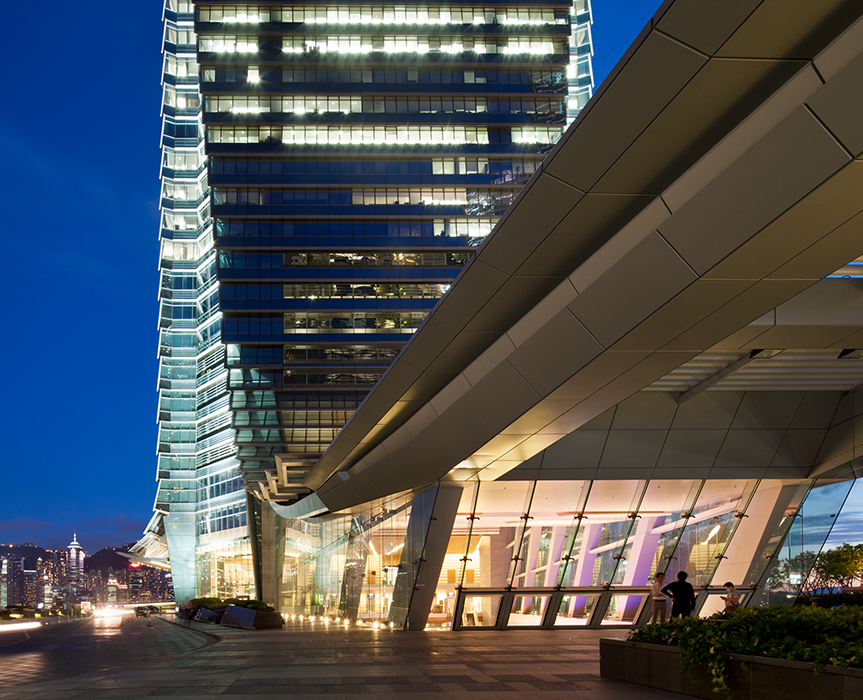 In 2001, Wong & Ouyang was appointed as lead architect by Sun Hung Kai Properties for the final three phases of the Union Square Development.

The project is highlighted by the 484m tall International Commerce Centre (ICC). Kohn Pederson Fox (KPF) was the Consultant Architect collaborating with WO to design this landmark tower with 231,800 s.m. of grade-A office space, crowned with the 300-room Ritz-Carlton Hotel.

At 118 storeys high, the ICC is as tall as Victoria Peak across the harbour, and has become the city’s new landmark and a hub for multinational headquarters.

The other components of the project include the 270-metre-tall Cullinan twin towers. Designed by WO, the two towers comprise the W Hotel and the Harbourview Place Suite, 72,472 s.m. of serviced apartments and 21,300 s.m. of residential development.

The Cullinan and the ICC were conceived as a group of three towers that mark the most prominent face to the Union Square development. Clad in a double-glazed unitized curtain wall system, the Cullinan twin towers are characterized by a modern, clean-lined aesthetic, making these hotel / service apartment buildings stand out from its Union Square neighbours. 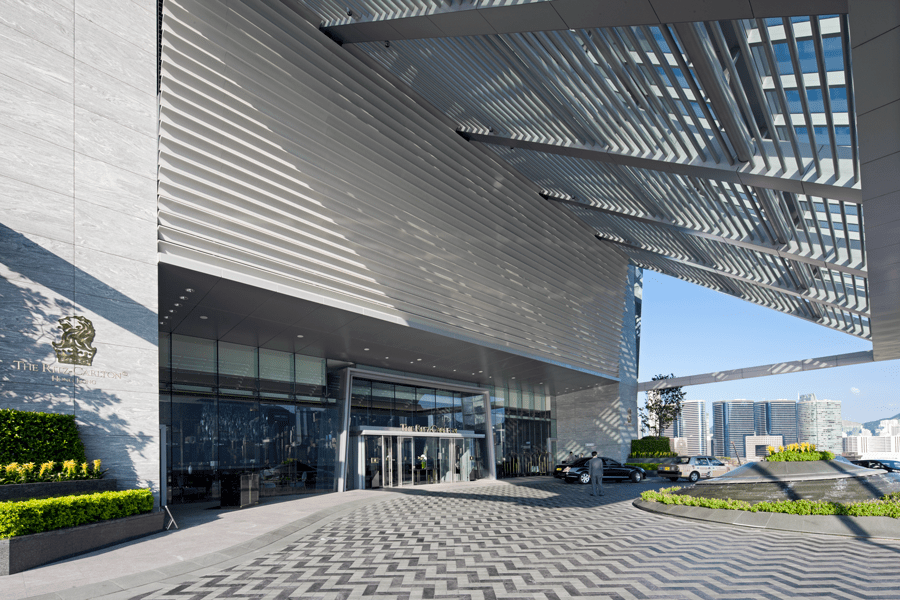 The 118-storey International Commerce Centre (ICC) rises 490m in height; the six-star Ritz-Carlton Hotel occupies the upper 15 floors in line with the design concept for the tower by Kohn Pederson Fox. Below it will be the first public observation deck in Hong Kong.

Offering more than 300 spacious rooms and suites fitted with advanced technological enhancements, it will be the highest elevated hotel in the world, surpassing that in Jin Mao Tower, in Shanghai. The top three guest room floors are dedicated as ‘club’ floors, including a 370s.m. Presidential Suite.

Recognizing the unique nature of its elevated location, the journey to the upper level main lobby would need to be something of an experience.

A feature drop-off on the edge of the landscaped podium overlooking the Hong Kong skyline welcomes guests. Under the sweeping canopy of the building’s envelope, the double -height grand arrival foyer leads to the dedicated high speed shuttle elevators to the main lobby, and leads to the 650s.m. Grand Ballroom and other conference facilities below.

The shuttle elevators open out to the main check-in lobby at the 103rd floor, which is set in a double-level volume as a floating deck with spectacular 360-degree views over all of Hong Kong. Themed fine dining restaurants below with the lobby lounge and bar become the places to see and be seen.

The top floor is reserved for an indoor swimming pool and gym with the best views in town. A spa and wellness centre with a rooftop garden provides an exceptionally relaxing experience for guests. Finally, a specialist restaurant with its own sky-garden dining terrace tops what will be probably the most dramatic hotel experience in Asia when it opens in 2010.

Adjacent to the ICC are the Twin Towers that comprise luxury apartments in one and a hybrid of two hotels, topped by large service apartment units, in the other.

THE CULLINAN I & II, KOWLOON STATION 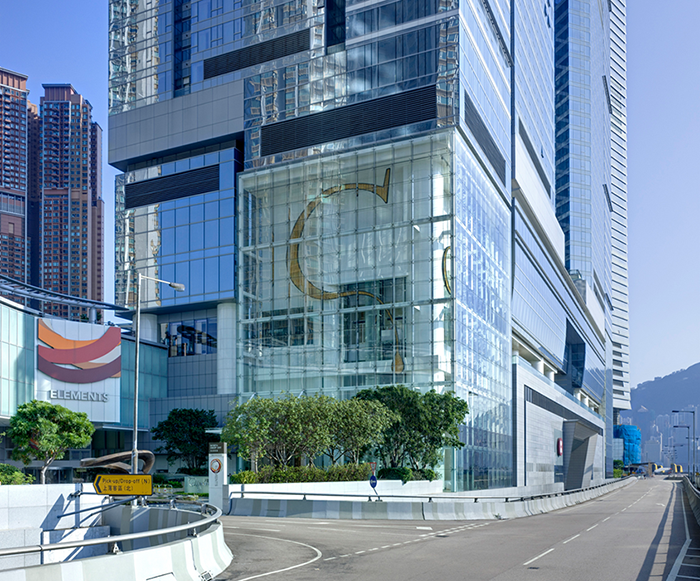 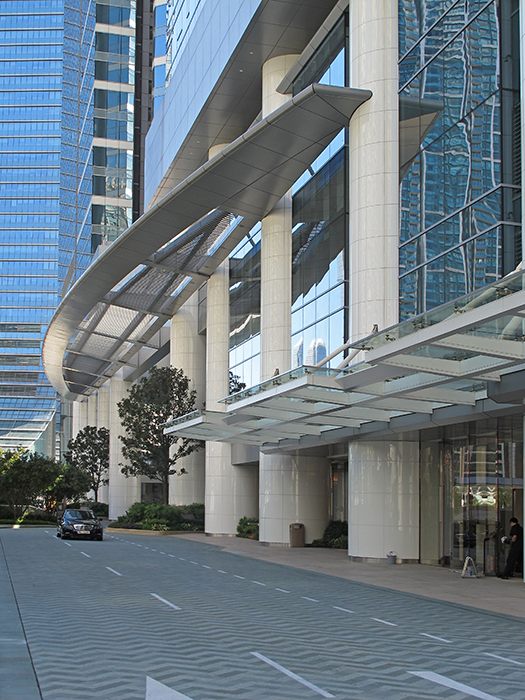 The project include the 270m tall twin towers, the Cullinan. Designed by Wong & Ouyang, the two towers comprise of the W Hotel and the Harbourview Place Suite, 72,472s.m. of serviced apartments and 21,300s.m. of residential development. The project was completed in 2010.

The variety of accommodation assigned to the Cullinan twin towers and the necessary integration with the retail component in the podium presented some unique planning problems requiring innovative solutions. The issue of access and identity was perhaps the most prominent. All vehicular traffic to Union Square is directed to an elevated road system on the west side of the site. To create an arrival experience that compliments the scale of both towers, forecourts were carved out of the podium either side of the towers at this level. These became the shared, formal arrival courts for both buildings and the retail mall.

Large 40m tall glass boxes at the foot of the towers mark the entrances to the ‘W’ Hotel in the south tower and the north tower Serviced Apartments in front of the forecourts. These contrast well with the horizontal expression of the podium retail mall facades giving each element its own presence. An internal road system leads from these drop-offs up to the landscaped podium deck where a separate double height covered drop-off between the towers serve as a more protected and private arrival. From here, the individual lobbies that serve the various serviced apartment and residential ‘zones’ and the residents recreation facilities, are accessed through a unique landscaped ‘street’.

Opened in 2008, Starwood Group’s W Hotel is located in the lower portion of the tower immediately next to the ICC. With 383 rooms featuring some 20 corner suites, three themed restaurants, a rooftop pool and bar, spa and health club, W Retail shop and extensive meeting facilities.

A 40-metre-high glass atrium marks the arrival to the W with its own landscaped guest drop-off. Glass elevators take guests up to level 6, to the elevated ‘W Living Room’ signature reception lobby where the harbour views are unobstructed. From here, elevators reach every guest room floor and the top floors of the hotel where a spa and recreation facilities cater to guests’ needs.

The roof of this lower portion of the building provided the opportunity to create an outdoor swimming pool together with an intimate pool side bar.

Above the W Hotel, the middle zone of the building houses the Harbourview Place Suites, designed for long stay guests, conceived with both contemporary design and comfort in mind. More residential in character, this 266 room all-suite hotel will be served by its own lobby facing the landscaped garden with mail and laundry services. More modest recreation facilities are provided within the tower. A variety of suites ranging from studios to three-bedrooms are available to cater for a maximum number of potential guests’ needs.

The three new hotels complement each other and enhance the vision for Union Square to become a hub for lifestyle in West Kowloon, giving more choices to consumers, shoppers and users.